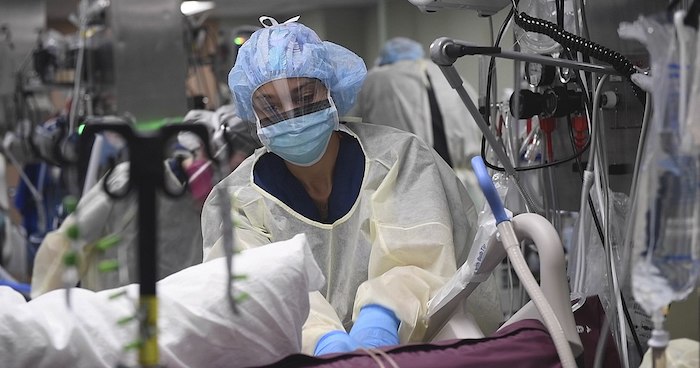 LAWRENCE — When the Food and Drug Administration issued an emergency-use authorization for the investigational pharmaceutical remdesivir to treat COVID-19 on May 1, in part it was due to pioneering work performed by pharmaceutical chemists at the University of Kansas School of Pharmacy in 1990. Today, KU graduates still hold important jobs at the firms producing and distributing the potentially life-saving therapy to people around the world during the coronavirus pandemic.

Remdesivir’s formulation includes the solubilizer Captisol, developed at KU, which allows remdesivir be administered to the patient. Captisol was invented and patented by Valentino Stella, University Distinguished Professor Emeritus, and Roger Rajewski, research professor in the Department of Pharmaceutical Chemistry.

“We use Captisol as an excipient to enhance the aqueous solubility and chemical stability of remdesivir,” said KU alumnus Reza Oliyai, senior vice president for pharmaceutical and biological operations at Gilead, the manufacturer of remdesivir. “All of us at Gilead are committed to doing everything we can to help address the global COVID-19 pandemic. The work of Professor Valentino Stella and also Dr. Roger Rajewski.at the University of Kansas has played a key role in the development of the remdesivir product that is being evaluated now for the treatment of COVID-19 infection.”

As co-inventor Stella himself recently detailed in a history of Captisol, at the time of its invention there was a need for a new solubilizer for cancer and other therapies to replace surfactant-based solubilizers that were leading to dire complications for patients.

“A lot of drugs don’t dissolve in water, or they’re chemically unstable because of their physical and chemical properties,” Stella said. “So, if you want to give a drug by intravenous injection, it’s got to be in solution. You cannot inject particles into your vein that get trapped by the lung and you end up with a lung embolism. Also, if you take the drug orally with a tablet, they’ve got to dissolve in the gastrointestinal tract. If a drug is extremely insoluble, it’s not absorbed and doesn’t dissolve while it’s going down the GI tract. So, there’s a need for solubilizers to modify the properties of a drug.”

Stella and Rajewski landed on the idea for the uniquely modified cyclodextrin, which came to be called Captisol, over beers one night. They were ironing out the path of Rajewski’s doctoral research to develop a less toxic solubilizer for cancer drugs. At the time, Rajewski was Stella’s graduate student.

Rajewski had the idea to modify the position of the cyclodextrin molecule’s charge so it could solubilize drugs without also dangerously interacting with cholesterol in the body. “We thought we could get the safety and have the binding back, and that was what ended up working,” Stella said.

Before Rajewski publicly defended his doctoral thesis on the new solubilizer, the pair filed a patent on their invention that also would pay royalties to KU. A startup firm called CyDex was spun out of the research to produce and market Captisol. Eventually, that firm worked with Pfizer but today Captisol is manufactured and marketed by the firm Ligand. It’s in the formulation of more than a dozen therapies on the market, including Kyprolis, Vfend IV, Noxafil Injection, Zulresso, Evomela and Nexterone.

But it’s the solubilizer’s inclusion in remdesivir that’s most notable during a global pandemic that’s cost so many lives and decimated economies around the globe.

“It’s gratifying to know the results of research I conducted in the Department of Pharmaceutical Chemistry here at KU are playing a role in the formulation of remdesivir for COVID-19 patients,” Rajewski said. “While I was fortunate to be involved in the invention of Captisol more than 30 years ago, the development of Captisol for human use was the culmination of efforts by many individuals, both at CyDex and then Ligand. Likewise, the ingenuity of scientists such as those at Gilead leading to drugs like remdesivir is humbling. The KU community should be proud to be part of the team that makes such treatments possible.”

Like Rajewski and Oliyai, many key players in the invention, production and marketing of remdesivir and Captisol were trained at KU under Stella.

“In 2001, I was fortunate to join a team of scientists and business entrepreneurs, many of whom are KU graduates, to develop and commercialize the nascent Captisol technology,” said James Pipkin, vice president of new product development at Ligand, who earned his pharmaceutical chemistry degree from KU in 1981. “Captisol has a proud tradition with KU. The last few months have been intense as Ligand works closely with Gilead to provide support for its use in formulating remdesivir. More Captisol than ever before may be required to make remdesivir available for treating COVID-19 in the U.S. and around the world. I’m grateful for the education and mentoring I received at KU and the opportunity to participate with innovators to create and make available on a global scale many life-saving and life-changing medicines, but none more urgently important than remdesivir.”

Those contributing to the manufacture of the drug, along with medical professionals and policymakers, are optimistic that remdesivir can make a difference to people being treated for serious COVID-19 infection.

For Stella, Captisol and his many other important contributions to pharmaceutical chemistry can best be measured by the benefit they have to human health.

“It’s not publishing the papers, it’s not earning the grants, it’s not the accolades you receive,” Stella said. “It’s the impact you make on people’s lives. And that’s been my mantra to myself and to my kids. It’s a very humbling experience, let me tell you, because you don’t necessarily start off thinking that way, even though people might say they did in retrospect. You know, I just wanted to be a professor, a teacher and a researcher — and I had some great mentors along the way. Then, as I’ve realized the work that I did was so impactful, it’s been pretty humbling.”

Right photo: Rendering of the molecular structure of Captisol, the solubilizer invented at the University of Kansas, which allows remdesivir to be administered to the patient. Remdesivir was recently authorized under an emergency-use protocol to treat patients with COVID-19. Credit: Valentino Stella, University Distinguished Professor Emeritus at KU.

The University of Kansas is a major comprehensive research and teaching university. The university’s mission is to lift students and society by educating leaders, building healthy communities and making discoveries that change the world. The KU News Service is the central public relations office for the Lawrence campus.